There is an anniversary to celebrate in 2016. Friend ’n Fellow is looking back on 25 musical years together.

Since 1991, when it all began with a concert in Leipzig, a lot has happened:

Tours throughout Europe, Asia and the USA; 10 CDs and over 100,000 recordings sold; evenings with Ray Charles, Al Jarreau and Luther Allison; music for Box-Events and Formel 1 teams...

But what is much more special are the intimate, unique and moving moments during one of their live concerts.

Depth, class and entertainment – and focussing on the essence of good songs.

And so their new album Silver Live offers a whole hour of pure Friend ’n Fellow –recorded up close in full intensity during their About April tour in 2015.

Wonderful guitar sound and an extraordinary voice, or as one critic wrote so fittingly: One voice, one guitar –and the rest is amazement.

»It was clear that the frenetically celebrated duo would have to work “overtime” and would only reluctantly be let go after the third encore. What a wonderful evening.« Hessisch-Niedersächsische Allgemeine

»Midnight blue and from the depths. Friend ‘n Fellow astound and enchant their audience. It is a delight to see and hear them.« Badische Zeitung

»Your chin just drops and stays that way« Nordsee-Zeitung

»The voice of an angel« Keb' Mo'
»You knocked me out with your playing« Bill Evans
»Killing – It sounds like a whole band!« Tommy Emmanuel
»The Sound Of The New Century« Luther Allison 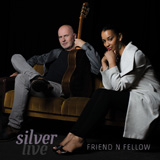 Constanze Friend started her musical career in the band "Mr. Adapoe" with performances at international top festivals and as the support act to James Brown and others.

THOMAS FELLOW won several prizes at international competitions for classical guitar and played concerts in India, South America and the USA. With his duo FRIEND 'N FELLOW he played more than 1000 shows in China, the USA and all over Europe and shared the stage with legends like Luther Allison, Al Jarreau and Ray Charles. Now FNF is one of the most successful European projects in the junction of Jazz, Blues and Soul.

Prof. Thomas Fellow is the head of the education "ACOUSTIC GUITAR (concert music/worldmusic/jazz) at the Hochschule für Musik "Carl Maria von Weber" in Dresden (Germany) and "WORLDMUSIC" at the Hochschule für Musik Weimar and lead masterclasses at different conservatories and festivals in Europe and the USA. He is also the artistic director of the STRING SPRING FESTIVAL DRESDEN and the EUROPEAN GUITAR AWARD, one of the most prestigious competitions for creativ guitarplayers. He is the author of the FELLOW GUITAR BOOK (Schott Music), the new bechmark for the guitar as comping instrument (in German language only).

FNF played more than 1000 concerts, including